Despite broad immunization coverage, outbreaks of measles and diphtheria have resulted in many unnecessary deaths

Immunization is widely recognized as one of the world’s most successful and cost-effective health interventions, saving millions of lives. In 2017, 116.2 million children were immunized, the highest number ever reported. At the same time, pockets of low coverage have led to outbreaks of measles and diphtheria, resulting in many deaths—a clear demonstration of the importance of reaching full coverage.

The proportion of children who have received the required three doses of the diphtheria-tetanus-pertussis (DTP3)-containing vaccine increased from 72 per cent in 2000 to 85 per cent in 2015, but remained unchanged between 2015 and 2017. An estimated 19.9 million children did not receive the vaccine during the first year of life, putting them at serious risk of potentially fatal diseases. 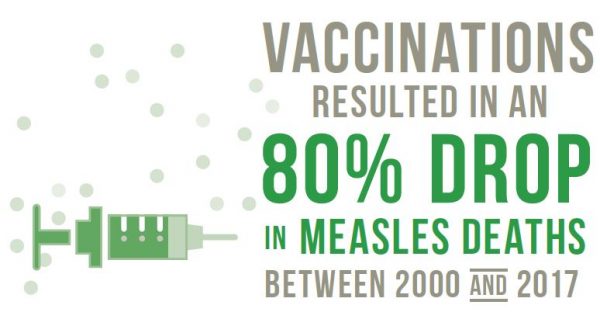 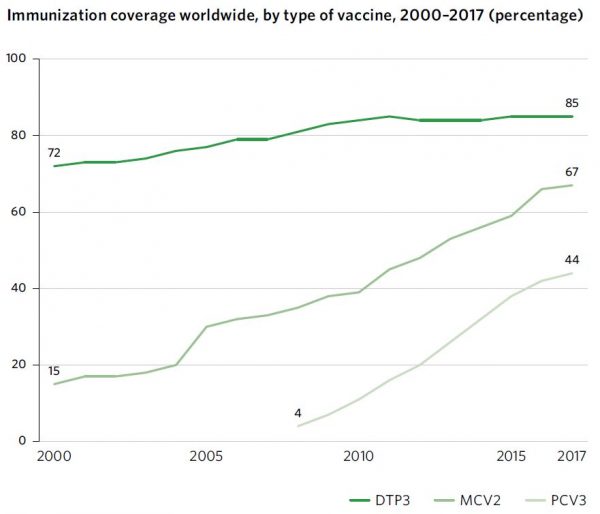 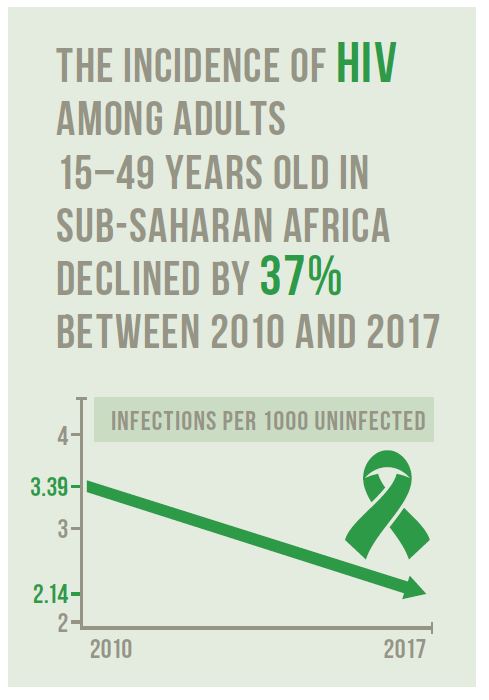 The decrease in HIV incidence is falling short of the target, despite steady progress in sub-Saharan Africa

Strong domestic and international commitment and funding for the AIDS response has fuelled an acceleration of evidenced-based programmes for prevention, testing and treatment. As a result, the incidence of HIV among adults (15 to 49 years of age) in sub-Saharan Africa declined by around 37 per cent from 2010 to 2017. This represents a drop from 3.39 infections per 1,000 uninfected people in 2010 to 2.14 in 2017. Progress has been slower elsewhere, and some subregions have even seen an increase in HIV incidence, including Western Asia (53 per cent), Central Asia (51 per cent) and Europe (22 per cent).
Global HIV incidence among adults declined by 22 per cent between 2010 and 2017, well short of the progress required to meet the 2020 and 2030 targets. The largest decline in incidence by age group was among children 0 to 14 years old (37 per cent from 2010 to 2017), reflecting increased provision of antiretroviral medications to prevent mother-to-child HIV transmission.