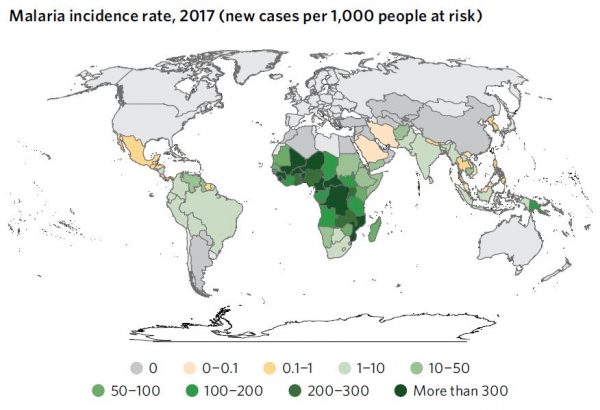 With progress against malaria at a standstill, increased efforts are urgently needed in the most affected countries

After more than a decade of steady gains against malaria, progress has stalled. No significant advances were made in reducing the number of malaria cases worldwide from 2015 to 2017. The incidence rate of malaria declined by 18 per cent between 2010 and 2015 – from 72 cases per 1,000 people at risk to 59 – and then remained unchanged from 2015 to 2017.

In 2017, an estimated 219 million cases of malaria and 435,000 deaths from the disease were reported. Sub-Saharan Africa continues to carry the heaviest burden, accounting for more than 90 per cent of global malaria cases, and the toll is rising. From 2016 to 2017, approximately 3.5 million more malaria cases were reported in the 10 most affected African countries. Increased support directed to the most affected countries is urgently needed.