No one to be left behind

The Internet can be a gateway to development, and a means of implementation for many of the SDGs. At the end of 2018, more than half the world’s population (3.9 billion people) used the Internet – an important step towards a more inclusive global information society.

Over 80 per cent of people in developed countries were online in 2018 compared to 45 per cent in developing countries, and only 20 per cent in LDCs. Access to broadband networks is believed to have a significant impact on global economic output. An increase of 1 per cent in fixed broadband penetration – the number of subscriptions per 100 inhabitants – is associated with a rise of 0.08 per cent in global GDP, on average. The impact is higher in developed countries than in developing countries. Globally, growth in fixed broadband subscriptions has been sustained, with the penetration rate rising from 3.4 per 100 inhabitants in 2005 to 14.1 in 2018. 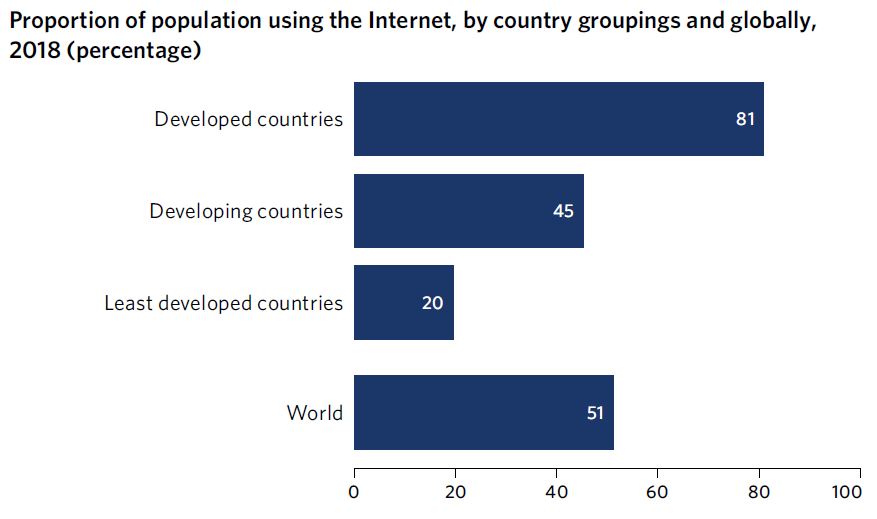 In 2015, world leaders adopted the 2030 Agenda for Sustainable Development that aims to end poverty, tackle inequalities and combat climate change. We need everyone to come together – governments, civil society, scientists, academia and the private sector – to achieve the sustainable development goals.

Support for implementing the SDGs is gaining momentum, but major challenges remain. A growing share of the global population has access to the Internet, and a Technology Bank for LDCs has been established, yet the digital divide persists. Personal remittances are at an all-time high, but ODA is declining, and private investment flows are often out of sync with sustainable development. Moreover, global growth has slowed due to ongoing trade tensions, and some governments have retreated from multilateral action. With the stakes so high, strong international cooperation is needed now more than ever to ensure that countries have the means to achieve the SDGs.